London, 1735. Covent Garden offers a world of pleasures and diversions, even for a blind man. Tom Finch approaches life with boundless good cheer and resilience, whether he’s pursuing a musical career or pursuing women. And as for his blindness, to him it’s merely an inconvenience.

Lucy May Lennox loves immersing herself in various historical periods and imagining the lives of people who don’t usually make it into the history books. A lifelong lover of classical and folk music, she has performed as a chorus member in operas and concerts in three countries, and once won first place in a sean nos (traditional Irish singing) contest. She lives in the beautiful Pacific Northwest USA with her husband and children. 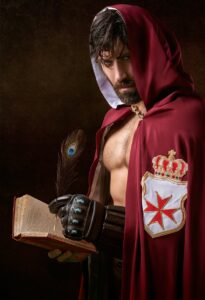 Growing up in a family devoted to the performing arts, Duke started his acting career a little later than expected. Since then he has performed internationally on both stage and screen. He has voiced characters in animated series, features, and video games.

He enjoys working with his lovely Duchess on audiobooks whenever he can find time away from galloping his trusty white stallion across the windswept moors, rescuing beautiful, clever, and passionate ladies in distress, and fighting sabre wielding brigands on the high seas.

Q&A with Author Lucy May Lennox